Short story extracted from Legends of the Amazon:


THE LEGEND OF THE AMAZONS


In the Kingdom of the Green Stones, there were only women, known as the Icamiabas, women without husbands. They lived alone led by a virgin who had no contact with the male sex and were ruled by their laws within the region of the Nhamunda river. They were hard workers, as well as excellent hunters. They were dedicated to fishing and made ceramics, nets, weapons, and ornaments.


For many years they were pursued by various explorers, however, they were never found, since the region was protected by various Indian tribes, of which the closest was the Guacaris. These were received by the Icamiabas at the annual celebration dedicated to the moon, and during that night, legend says, they paired up and then submerged themselves in Iaci-uarua lake ("mirror of the moon") to search, in the depth, the raw material which the muiraquitãs were molded. When the muiraquitãs were extracted from the water they hardened. Then, they gave their companions this fertility talisman, an ornament in the shape of a frog, and they proudly hung it around their necks, since it was the insignia of the nuptial night.


During the celebration of the festival the following year, the women who had conceived a baby, if it were a boy, would give it to Father Guacari, and in the case of a girl being born, they would keep her so that the tradition would continue. 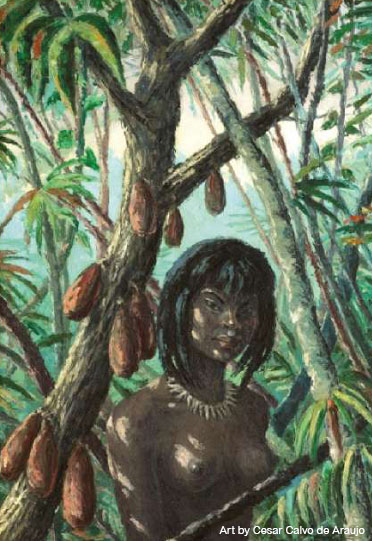 They also say that the Spanish explorer Francisco de Orellana had sighted these warrior women in the sought kingdom of "Piedras Verdes", mistaking them for those of Ancient Greece. The Indians say that they attacked the Hispanic fleet in a fierce battle that took place at the mouth of the Nhamunda River. The Spaniards, surprised by the attack of these numerous and beautiful combatants, were promptly defeated by the bows and arrows of the Icamiabas, quickly escaping.


Then the legend was born. Fray Gaspar de Carvajal, scribe of the fleet, recounted the adventure, and the women with long hair with braids folded on top of the head, were given the name of the Amazons (Amazonas.)


Leaving aside the legend and entering into the reality, what we know is that the Spanish expeditions that arrived in the Peruvian rainforest from the 16th century, gave the name of "Amazonas" to the main river that crosses several regions of the country, referring to the warriors of Greek mythology. For a long time, a view was spread about the inhabitant of the Amazon as a wild being and their territory was seen as a space destined for exploitation. Undoubtedly, art has allowed this region to be known more and more today, and to recognize the value of its men and women, who, with their knowledge, myths and history, maintain the cultural legacy of their peoples and the balance of an ecosystem necessary for the subsistence of humanity.


We share with you a short video made on the bicentennial of Peru 2021 that collects a great variety of Amazonian art, as well as a deeper look at what is perceived as "Amazonia" both today and in the past.