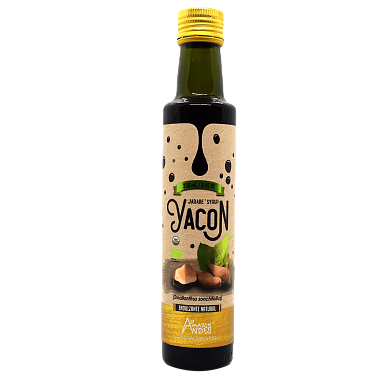 HIT In stock
Organic yacon syrup, 8.45 fl oz (250 ml)
Be the first to review this product
$43.52
Information about delivery
Yacon roots have been used for quench–thirsting. According to some historians, “chasquis” (messengers of the Inca’s empire) used to take with then Yacon roots for quench–thirsting and to satisfy some electrolytes. This situation is totally understandable if we take into account that Yacon has a high percentage of water, sugar, and vitamin K. Yacon is cultivated not only in Andean valleys but also in the Peruvian Coast. Evidence of that is Paracas’ mummified remains where, according to some archaeologists, Yacon roots were found in each remain. Likewise, Towle (1961) said that Yacon was considered as a food source in the Mochica period—ancient Peruvian culture—located to the North Coast of Peru. The potters from this culture used to draw Yacon on clay pots. This is an indicator that reflects the importance of Yacon for our forbear. Yacon contains a lot of benefits and properties; also, it has easy cultivation. Yacon (Smallanthus sonchifolius) has succulent roots that have delicious substances with a sweet flavor. Besides, Yacon has sugars as inulin (its fresh roots about 17%–20% and the dried part about 65%). This is a glucose polymer for human consumption. Thus, yacon is highly recommended for diabetics and for those people who follow a strict weight–loss regimen.

SUGGESTED USE
Keep in a cool, dry place at temperatures below 86 °F (30 °C).
Protect from light.