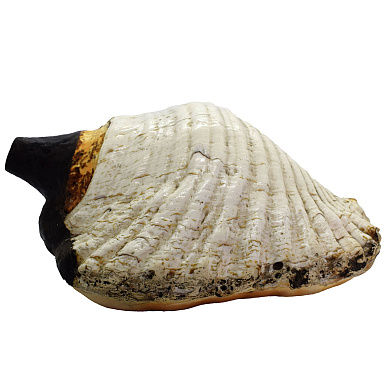 In stock
Natural trumpet made of snail shell - Pututo - Chavin culture
Be the first to review this product
$166.13
Information about delivery
"Pututo" or "Waylla kepa", is a natural trumpet made of snail's shell (Strombus galeatus) - This is a traditional instrument of the Chavin culture (Nepeña Valley - Ancash) 500 - 1000 BC. This is a wind instrument, with direct blowing in which the sound is produced by the vibration of the player's lips at the mouthpiece, this trumpet has a narrow channel at the beginning that then extends to a body with greater space that amplifies the vibration of the breath, achieving a resonance that is projected into the distance. This feature allows the instrument to be used outdoors and with a call, notice, or summons role. The context of this sacred instrument of communication has been used long before the Inca empire and in many cultures of America and the world; the "chasqui" or royal messenger of the Inca used it as part of his sacred clothing. In the temple of the Chavin culture (locates in Ancash region in Peru) many specimens were found in this temple with carvings of snakes shapes symbols. It is believed that it was part of the mysterious religious ideology of the Chavin when blowing them in their tunnels giving mystical and sacred acoustics.

ADDITIONAL INFORMATION
For larger quantities, the estimated completion time is 15 to 30 days
Order available to the supplier.
Contact by email: sales@amazoniafood.com