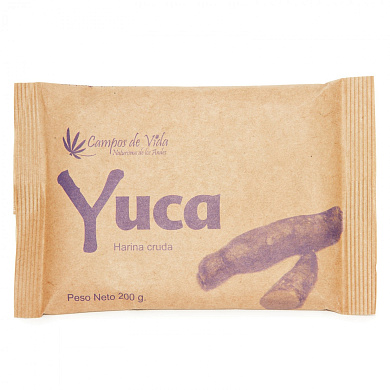 HIT In stock
Yucca flour, 7.05 oz (200 g)
Be the first to review this product
$17.12
Information about delivery
Yucca's cultivation has dated for 4000 years ago in South America. There are some stories regarding this tuber in Peru. One of them is the story of a beautiful young lady with the sweetest heart. She was the daughter of some important Inca. One day, she runs into his father's arms crying. She told him that she was pregnant all of a sudden. Her father, angry and disappointed, threatened her to death because he couldn't stand his anger and frustration. She didn't understand why his father threatened her since it wasn’t her fault. That night, his father had a dream where a magic soul told him, "It is not your daughter's fault. She is not guilty!" The next morning, he took the decision to trust in his dream and to don't punish her. Timepass his daughter died giving birth to a lovely girl. Her name was Mani and she grew up bringing joy to people of the town. Unfortunately, she died too young. All the people who saw her grew up were really sad and buried her next to a big tree near the riverbank of the Virgin Forest. Not much later, beautiful flowers grew up around the tree. The people were astonished by the miracle and started to dig. They discovered that the roots were thick and white from the inside. Later, they found out that these roots were delicious and decided to call it Mani to honor the little girl. Yucca Flour —also known as Cassava or Manioc as its botanic name— is an excellent alternative for replacing wheat flour on the bakery. Besides, it has vitamins C and B. It is high in minerals and starch.

SUGGESTED USE
Keep in a cool and dry place.
Eat it once opened.