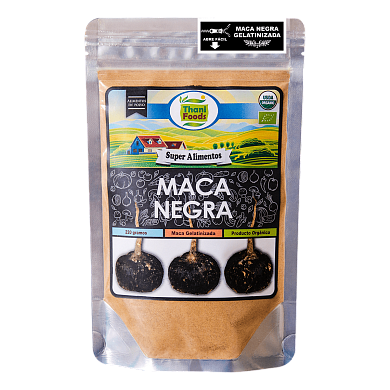 HIT In stock
Gelatinized black maca powder, 7.76 oz (220 g)
Be the first to review this product
$22.48
It is said that when Spanish conquistadors landed in the Inca empire, few animals resisted the expedition and they couldn't breed with normality. They were victims of the high temperatures of the Highlands, so they were dying one by one without giving legacy. The Indigenous of the zone recognized Maca as a great aphrodisiac, so they told the conquerors to feed their animals with it. The results were amazing since the animals could breed again. Black maca is characterized by increasing physical and sexual stamina, male and female fertility, and mental focus. Besides, it is precooked. Gelatinized red maca means that this root has been processed through extrusion where its starch molecules are neutralized or gelatinized. This provides better and faster absorption of its nutrients. According to Peruvian customs and some studies about Maca, this superfood works as an energizer, invigorating, antidepressant, and as a natural antioxidant. Also, it provides fertility and hormonal balance.