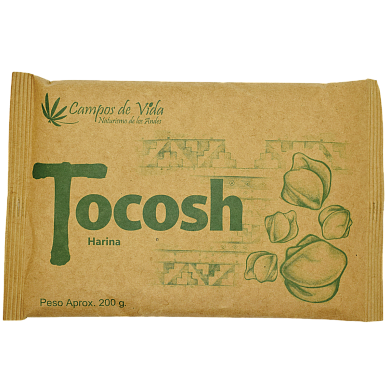 HIT In stock
Tocosh flour, 7.05 oz (200 g)
Be the first to review this product
$21.36
Information about delivery
During the Inca empire, food was considered a gift from their Gods known as Apus. That action was considered a demonstration of affection. The potato was the best demonstration of love for them. They acknowledge Tocosh as a type of food that could keep the body healthy. Tocosh preparation was through potato’s fermentation where spring water or river was involved. They used to dig a hole on the river bank, and they put selected potatoes that were inside a hairnet made of “ichu” (Andean straw). Once in the hole, they were pressed with stones. After this, potatoes were fermented for 6–12 months. The flowing water started to transform potatoes' properties and generated a natural antibiotic (Quillama, 2012). Tocosh flour (Solanum tuberosum) is obtained through potato fermentation for a couple of months in Andean river pools. Tocosh helps to relieve bronchial disorders and gastritis. If Tocosh is consumed at hot temperatures it can increase body heat.

SUGGESTED USE
Keep in a cool and dry place.
Eat it once opened.