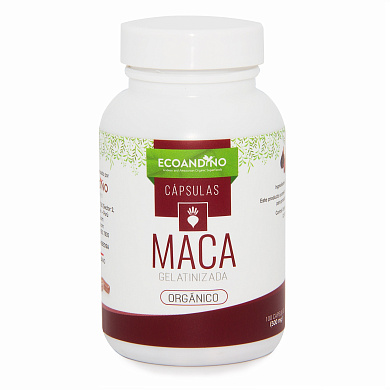 In stock
Organic gelatinized maca, 100 capsules x 500 mg
Be the first to review this product
$26.30
Information about delivery
It is said that when Spanish conquistadors landed to the Inca empire, few animals resisted to the expedition and they couldn't breed with normality. They were victims of the high temperatures of the Highlands, so they were dying one by one without giving legacy. The Indigenous of the zone recognized Maca as a great aphrodisiac, so they told the conquerors to feed their animals with it. The results were amazing since the animals could breed again. From that time to the present, Maca is known to be a millenary superfood from the Peruvian Highlands. Ecoandino is founded by Carlos Samaniego. He invites us to know the benefits of the Amazon and Andean areas from the central region of Peru. Since 1998, he and his team decided to show us the originality and nature while choosing superfoods and sharing those to the world. Maca or Lepidium Meyenii is found only in the central highlands of Peru, mainly on the Junin plateau between 3 800 to 4 000 masl, where altitude, low temperatures and strong winds limit other crops. Ecoandino has its maca fields associated with small organic farmers on this plateau. Maca raises energy levels. This superfood combats physical and mental fatigue and stress. It strengthens the immune system, stimulates the endocrine system, balances the diet avoiding malnutrition, increases endurance in athletes promoting mental clarity and improves concentration. Besides, Organic Gelatinized Maca is easier to digest, since the organism absorbs its nutrients faster.

SUGGESTED USE
Keep in a cool, dry place at temperatures below 86 °F (30 °C).
Protect from light.